Just three days ago we had our first glimpse of the 11th LEGO Ideas set 21304 Doctor Who and now this morning I have received a copy and I have pulled out the all stops to bring you the Internet’s first review.

First I will come clean and declare that I am not a fan of the latest Doctor Who series. Jon Pertwee and Tom Baker the 3rd and 4th Doctors were ’my’ doctors growing up and while I did watch the Christopher Eccleston and David Tennant series I found the increasing implausibility of the plots and the fact that despite having all of time and space to travel in he was always on Earth in recent times ridiculous.

Nevertheless when Andrew Clark’s Ideas project got the green light in February this year I looked forward to seeing what LEGO came up with. So let’s see whether it has been worth the wait…

As with all Ideas sets it comes in a sturdy flapped box that can be opened without destroying it. 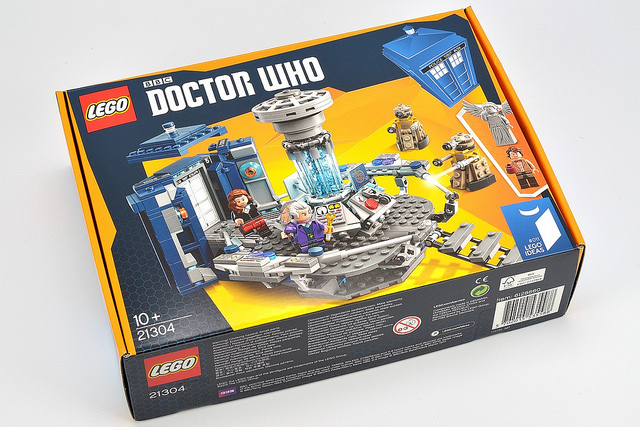 We have seen pictures of the front of the box already but nevertheless it’s worth taking another look. It shows the 12th Doctor Peter Capaldi sonic screwdriver in hand and Clara Oswald hurriedly returning to the interior of the time machine perhaps being pursued by the two Daleks. The other two minifigs the 11th Doctor Matt Smith and a Weeping Angel are shown in a separate panel. 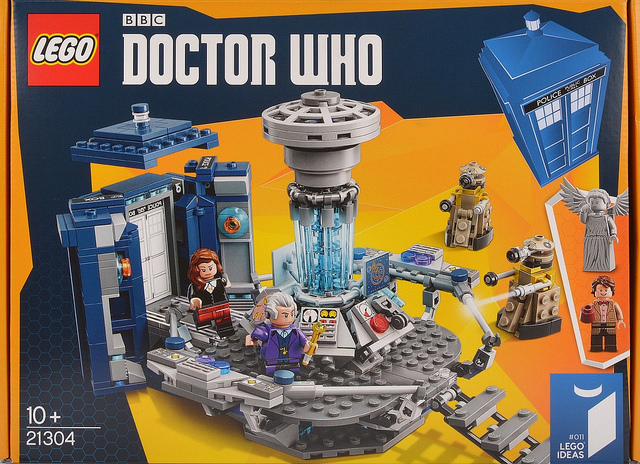 The rear shows the pair of them operating various controls and also how the interior of the Tardis connects to the exterior. 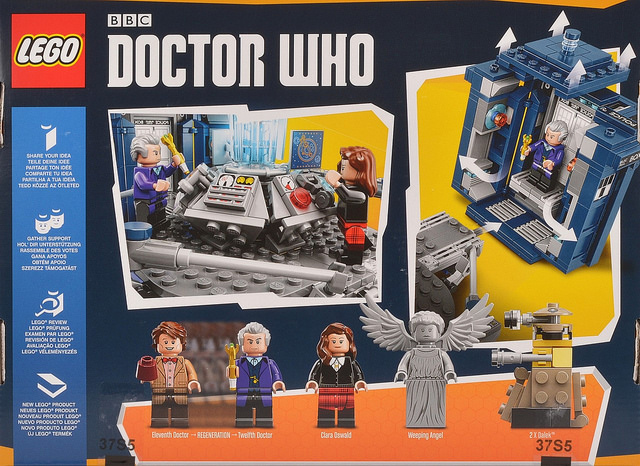 The 127-page perfect bound instructions carry the same image as the front of the box and contain information about the show and the characters at the front and about Andrew Clark and the LEGO designers that worked on the set Samuel Johnson and Adam Corbally at the back.

It is here that a very interesting fact is revealed: Samuel Johnson’s uncle was Paul McGann the 8th Doctor who appeared in a film made in 1996 which was an (unsuccessful) attempt to re-launch the show following its cancellation in 1989. No wonder he wanted to work on the set! 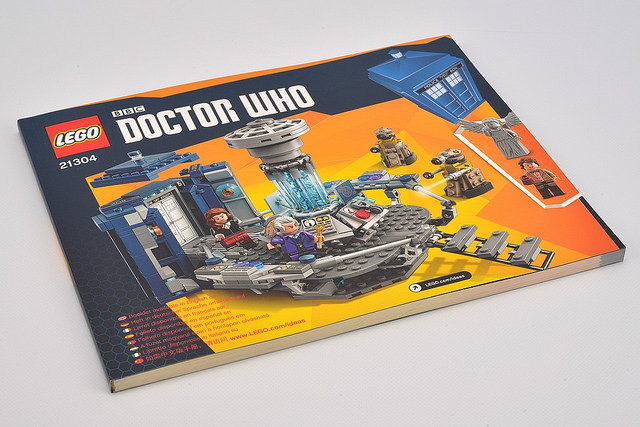 Opening the box reveals that it’s packed with bags and of course the instructions. 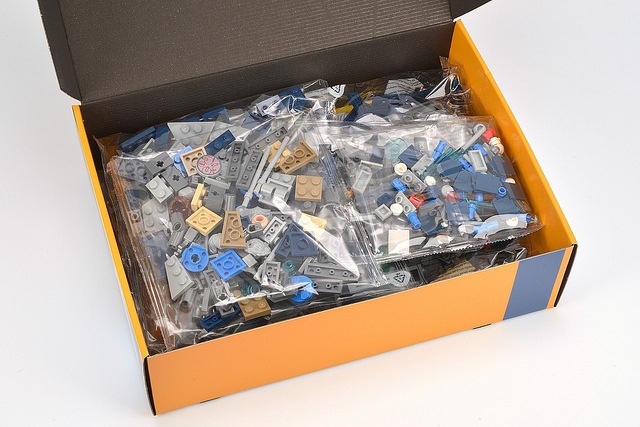 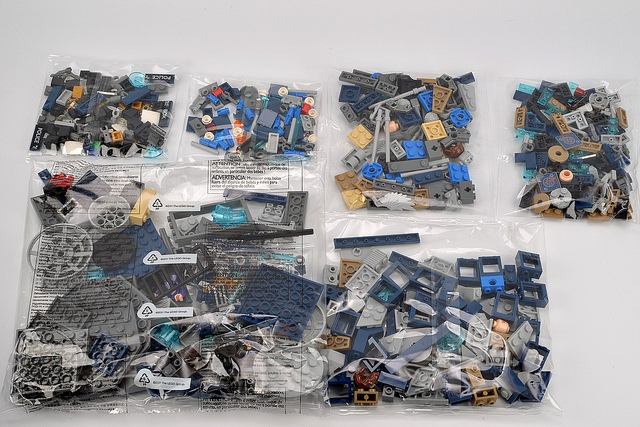 What a parts pack! If you are a fan of dark blue you will find plenty of it including many parts not available in that colour before: 1x2x2 window frames 1×4/2×2 plate hinges and 1×1 round tiles to name a few.

Best of all there are no stickers! All the printed parts apart from the Dalek tops are shown below.

Other notable parts are a new (to me) transparent part that goes on a minifig head and provides two studs on the back the sonic screwdriver and a pair of the new transparent ’1×1 round tile with nipple’. 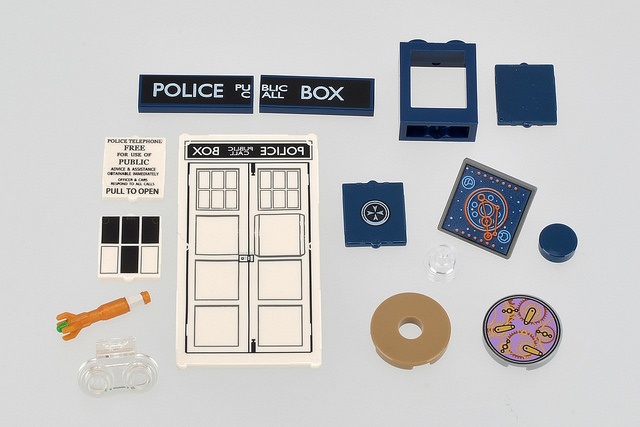 The first two look spot on: the Doctor in bow-tie and brown checked suit Clara in tartan skirt white blouse and cardigan. However I’m not so convinced by Peter Capaldi. I’m told that he is usually just wearing a black suit or coat although this image shows him in crimson-coloured greatcoat which if that is the attire LEGO was trying to replicate the purple it has used is not right. Maybe dark red would have been better? 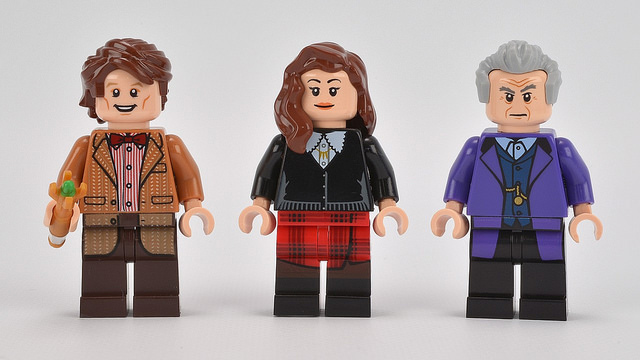 All three have printed backs and Clara has bi-colour legs. For some reason the 12th Doctor doesn’t have an alternate expression. 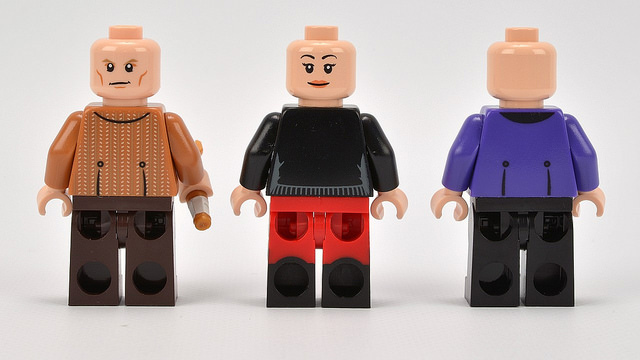 The weeping angel looks great and it is her that uses the transparent neck bracket for attaching the wings. Here she looks quite serene… 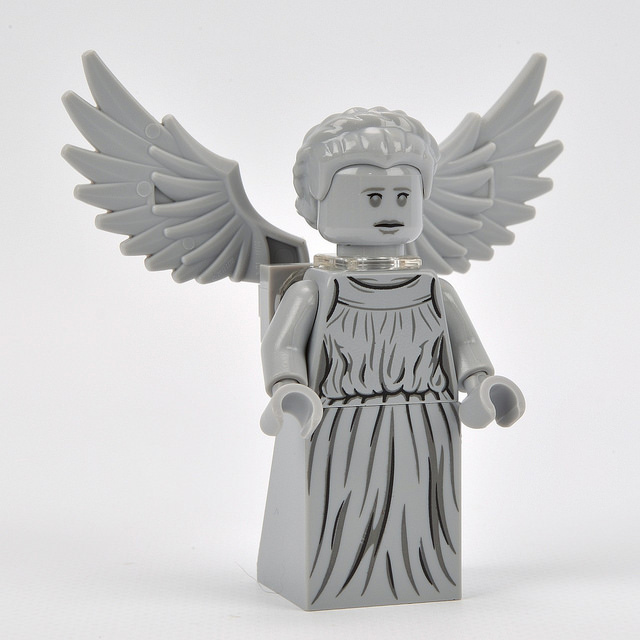 … but turn her head around to expose what is possibly the scariest minifigure head I have seen!

I’m told by my daughter Alice’s boyfriend (a DW fan) that including a weeping angel in this set is a bit odd given that they are more associated with the Amy era. (The Doctor’s assistant before Clara). 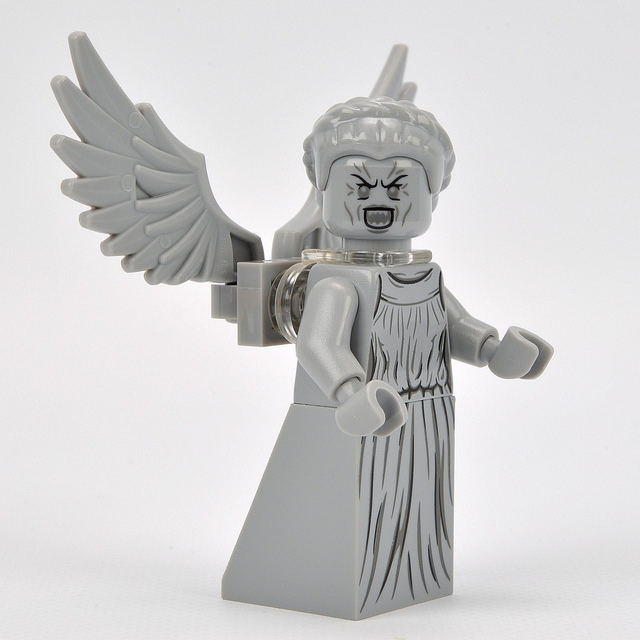 The interior of the Tardis is built before the Daleks but I will take a look at them first.

Two are provided both identical in design and colour dark tan and gold. I think Samuel has done a pretty good job capturing their distinctive look. 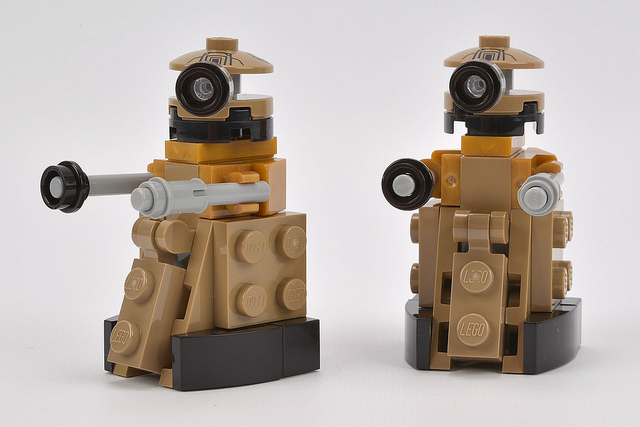 The 2×2 dishes used for the tops of the heads are printed. Here you can see where the ’1×1 tile with nipple’ has been used: for the eye. 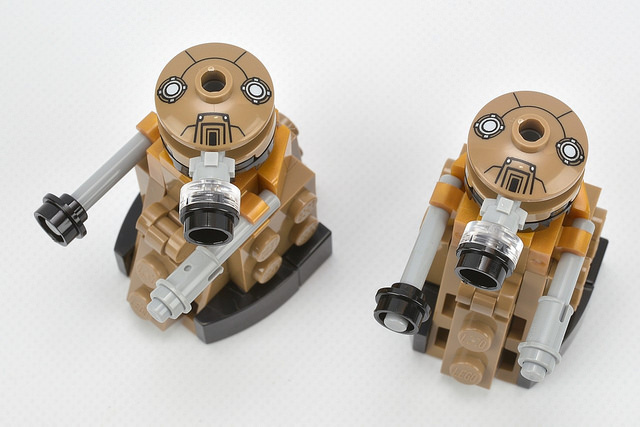 Alice’s boyfriend wondered why they are dark tan and not in one of the more vibrant hues introduced recently which is a good point because according to this Dalek colour scheme page ones matching this colour first appeared in 2005 and appear to have been phased out in 2010 when Matt Smith took over from David Tennant.

It’s interesting that it’s a totally different design to that in the forthcoming Dimensions pack. 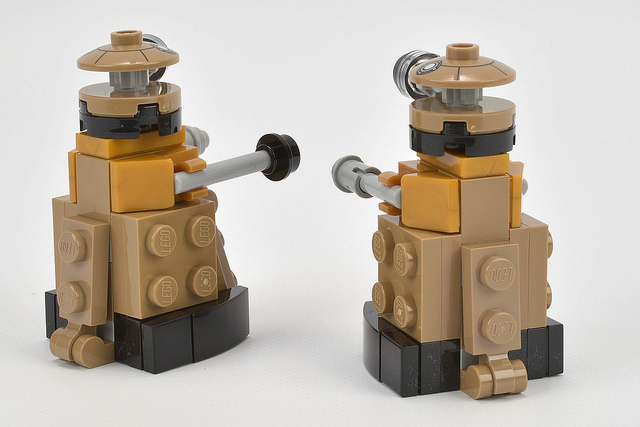 Construction of the interior

Here’s how the interior comes together: 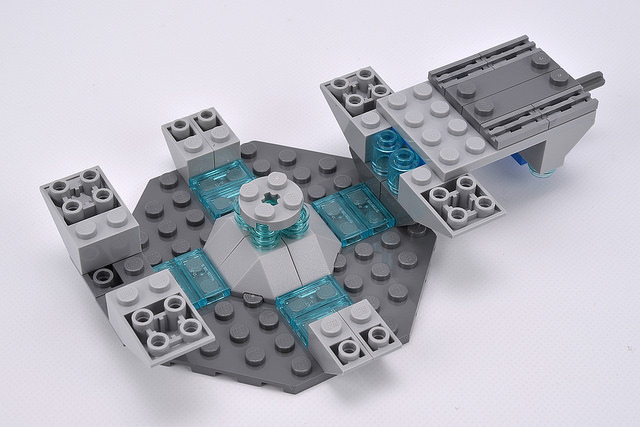 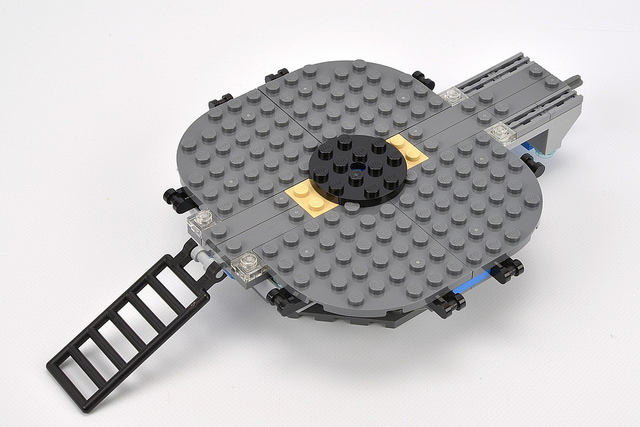 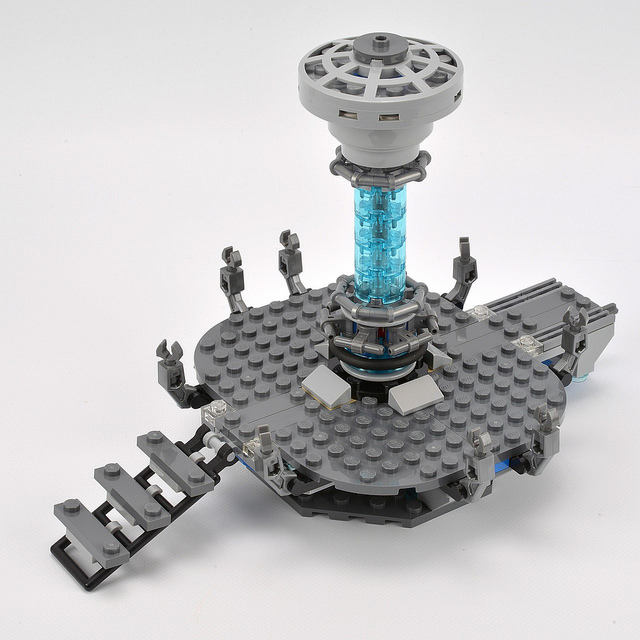 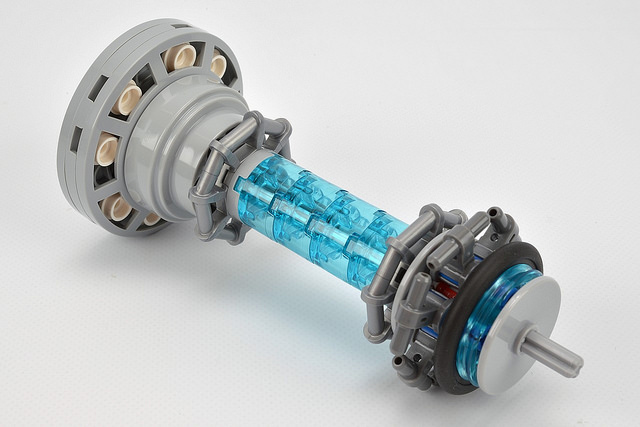 I’m no expert but it appears to be a pretty good representation of the Tardis interior as it appears in series 7 and series 8 with hexagonally-arranged control panels around a central column with the time rotor at the top. 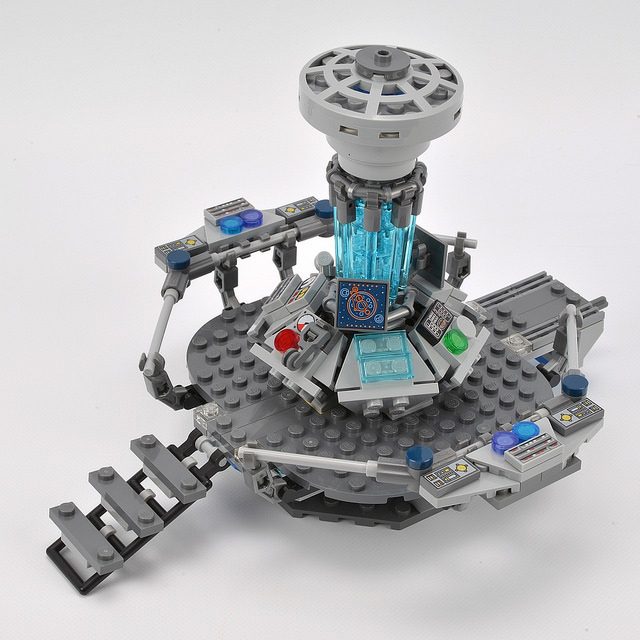 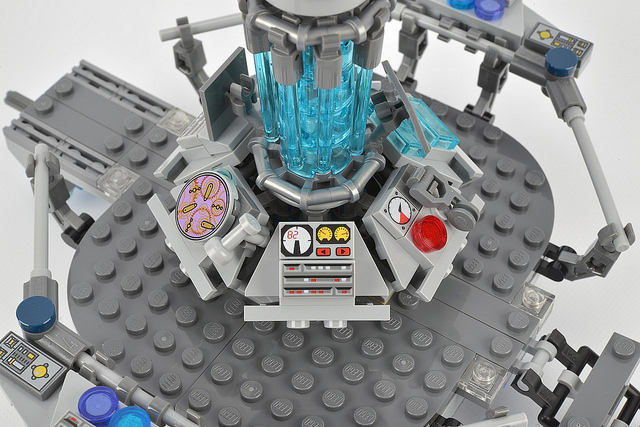 There’s not much to say about construction of the exterior of the Tardis as it is straightforward and consists mainly of stacking the 1x2x2 window frames and adding their inserts. Some SNOT work is needed to attach the 1×8 tiles to the corners. 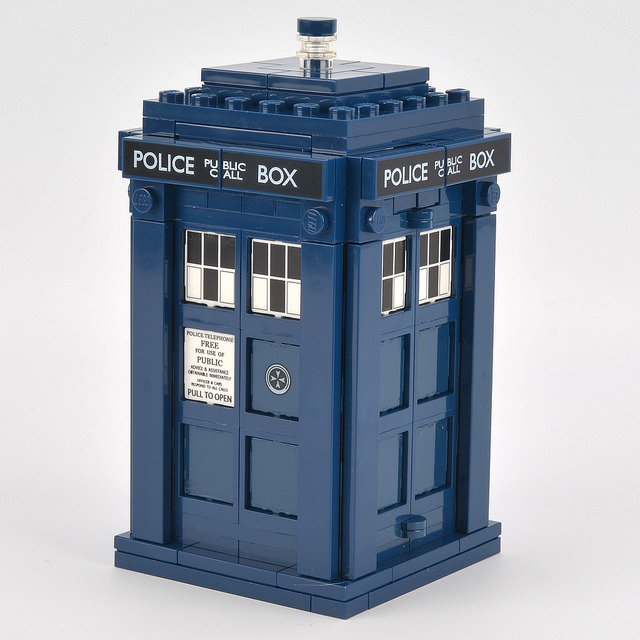 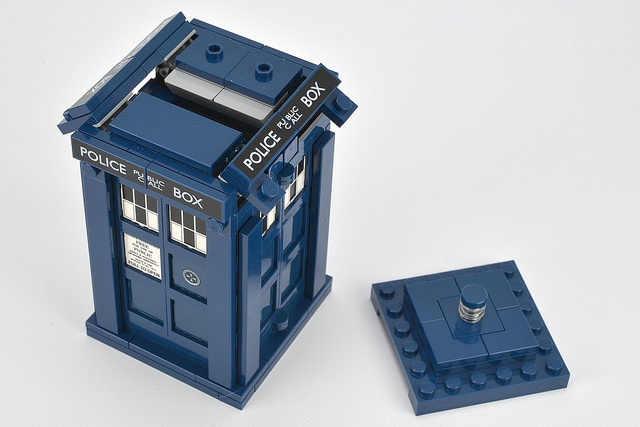 …thus allowing the back to be opened. Note the white door pane printed with the reverse of the front door. Not sure it’s entirely accurate but it’s cool nevertheless. The level of detail added to the hinged sections is impressive. 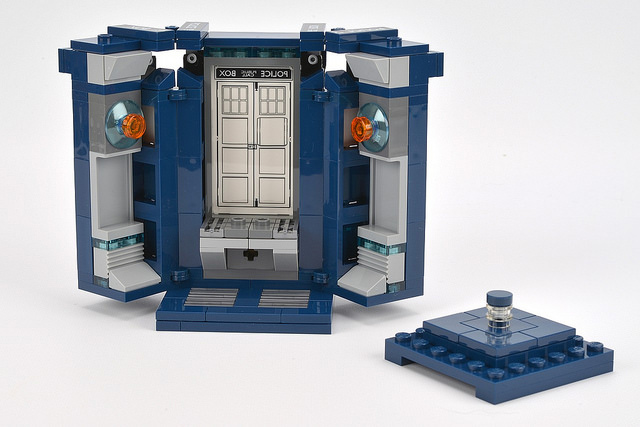 When I saw the Police Box lettering at the top of the Tardis a few days ago I wondered why on earth it was there. Now it’s obvious! 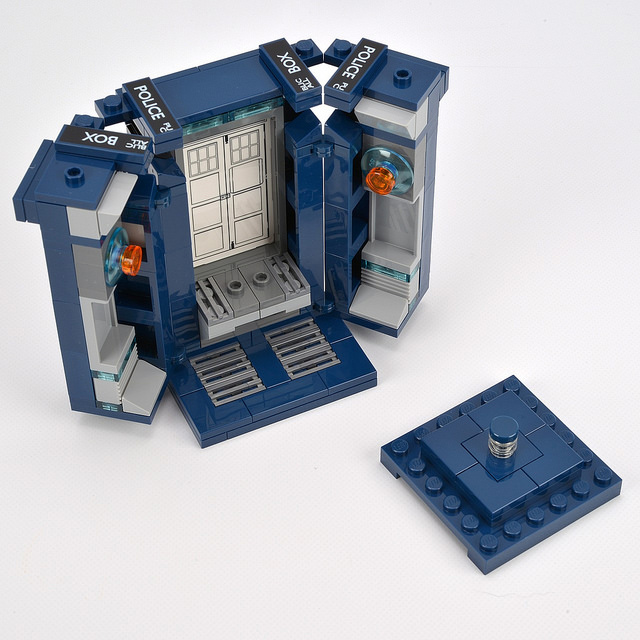 A Doctor can be placed inside. 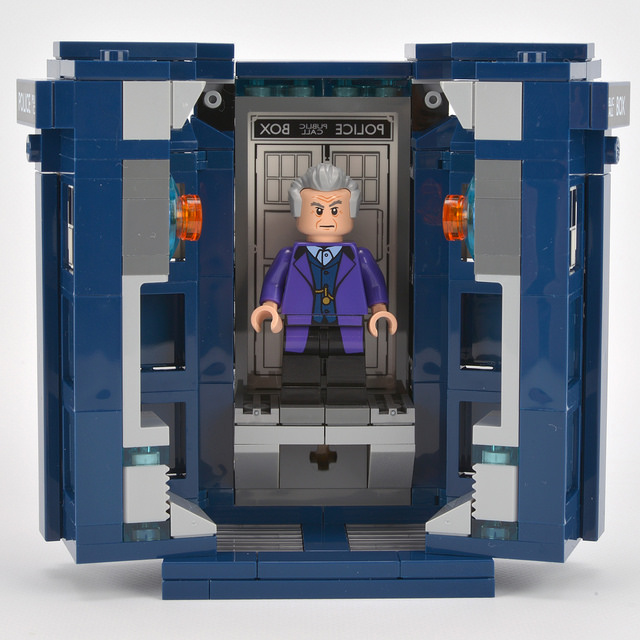 The exterior is joined to the interior section using a Technic axle. 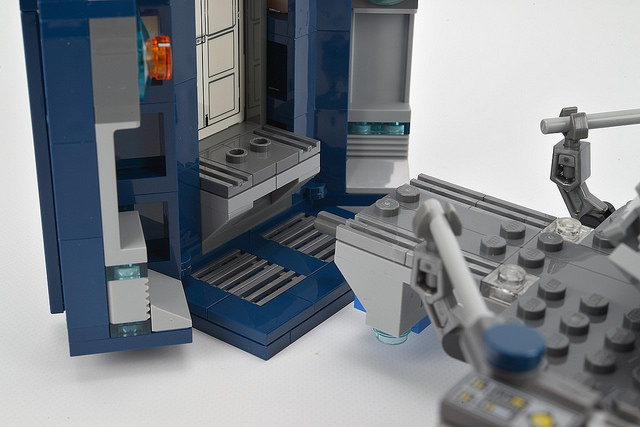 Here is the completed model… 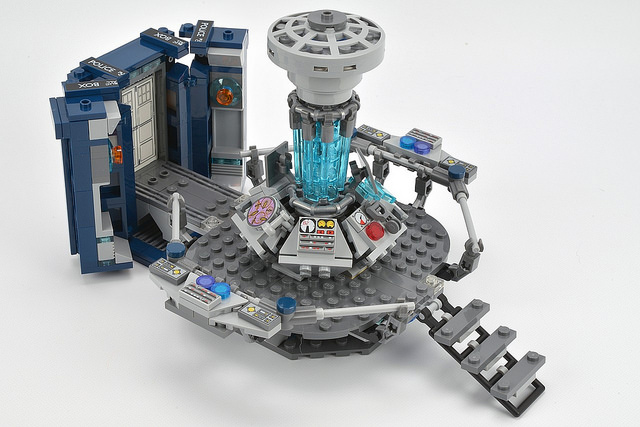 Quite simply it is fantastic. Every aspect of it. Perhaps the 12th Doctor’s coat is not quite the right shade but I can live with that. It successfully captures the ’bigger on the inside’ concept of the time machine and both interior and exterior models are superb. Plus the Daleks are cute

Those of you who see sets and think ’parts pack’ rather than ’cool model’ it will satisfy you too thanks to the plethora of new parts in dark blue and a smattering of useful dark tan ones too.

It’s everything you could want from the first of what will hopefully be many Doctor Who sets. 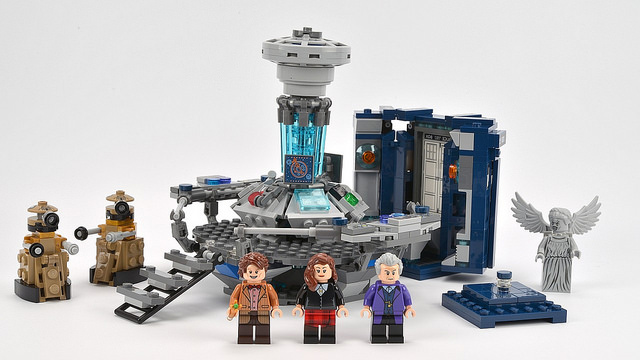 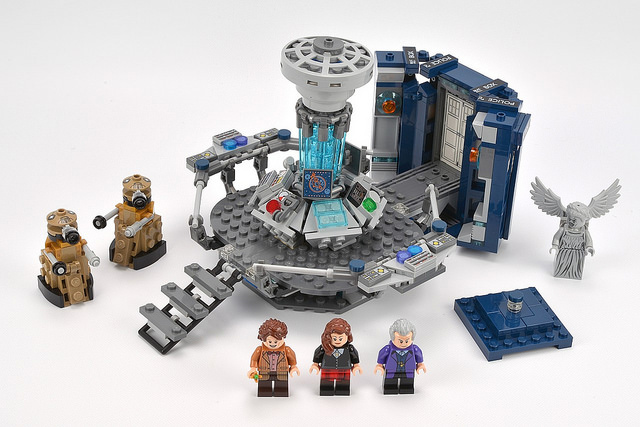 Many thanks to Norton & Co LEGO UK’s PR agency for providing the set in such a timely manner for review!